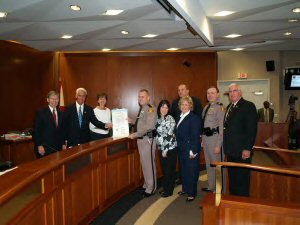 The Florida Cabinet honored Trooper Thomas Winders today, naming him the 2008 Trooper of the Year for the Florida Highway Patrol. Through a resolution proposed by Attorney General Bill McCollum, the Cabinet recognized Trooper Winders for his heroic efforts in attempt to save two lives on June 22, 2007.

The Florida Petroleum Council developed the award program more than 40 years ago to recognize troopers that go above and beyond the call of duty. The awardee receives a plaque along with a pin identifying him as the 2008 Trooper of the Year to be worn on the uniform.

“Trooper Winders displayed extreme courage at great personal risk,” said Colonel John Czernis, director of the Florida Highway Patrol. “We are proud to be here today to honor him with this well deserved award.”

On June 22, 2007, a vehicle crash occurred on State Road 91, one mile south of State Road 802 in Palm Beach County when the driver of a black 2004 Acura lost control and traveled into a deep water canal. In seconds, the vehicle was completely submerged in the water with two people trapped inside.

Trooper Thomas Winders arrived on the scene, along with Trooper Christopher Zarazinski. While Trooper Zarazinski maintained control of the scene, Trooper Winders entered the water to rescue the victims. He cut the seatbelt off the female occupant and pulled her to shore. Then he went back into the canal to rescue the male passenger and bring him to shore. Neither of the victims was breathing at the time.

Several Good Samaritans immediately began CPR on both victims while Trooper Winders reentered the canal for a third time to confirm no others were trapped inside the vehicle. The Good Samaritans were able to revive both victims. Shortly thereafter, Palm Beach Fire Rescue arrived along with Palm Beach Trauma Hawk to assist with first aid. Both victims were in critical condition and were airlifted to Delray Medical Center. Unfortunately, the female was pronounced dead later that night. However, the male passenger was admitted in serious condition at Delray Community Hospital. He has since recovered from his injuries.

Congratulations to Trooper Winders for this extraordinary achievement and for his service and dedication to the State of Florida.