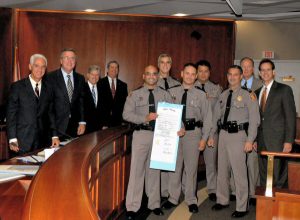 On May 10, 2005, Trooper Jorge Lopez-Torres and Trooper Carlos Austin responded to a serious vehicle crash that occurred in a remote section of the Sawgrass Expressway in Broward County, Florida. Upon arrival on the scene, both troopers were advised that the two vehicles, a pickup truck and a commercial motor vehicle, had experienced a head-on collision with one another and both vehicles came to final rest submerged in a canal that bordered the highway. Witnesses to the crash advised the troopers that the driver of the commercial motor vehicle was entrapped in the truck’s cab and there was no sign of life. 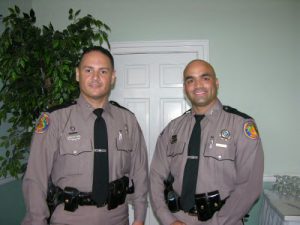 Without hesitation, both troopers dove into the murky canal waters and found the unresponsive driver pinned inside the vehicle. Once they freed the man and brought him to the surface, Troopers Lopez-Torres and Austin began to administer CPR. Soon, the victim began to breathe on his own. Shortly, local emergency medical services arrived to transport the victim to a local hospital. 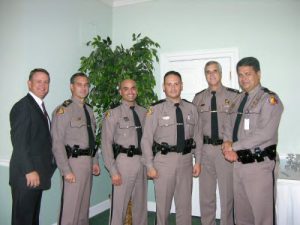 Both troopers acted in the highest tradition of the Florida Highway Patrol and are commended for their life saving actions.

Trooper Jorge Lopez-Torres, a seven year veteran of the Florida Highway Patrol and Trooper Carlos Austin, a four year veteran, are both assigned to Troop K, and are responsible for patrolling the Florida Turnpike and other toll roads within Broward County.

Read more about these troopers:

FHP Names Troopers of the Year

Published on Thursday, August 17, 2006
in the Chipley Bugle

Trooper Austin and Trooper Lopez-Torres were officially recognized as FHP Troopers of the Year by Governor Jeb Bush and Cabinet members during Florida Cabinet Meeting.

The Florida Petroleum Council has sponsored the Trooper of the Year Award since 1965. The award is presented annually to an outstanding trooper(s) in recognition of acts of heroism or exceptional performance of duties.

Trooper Austin and Trooper Lopez-Torres were selected for this prestigious award based on the following incident: On May 10, 2005, at approximately 10:00 AM, Trooper Austin and Trooper Lopez-Torres responded to a head-on crash that occurred on the Sawgrass Expressway involving a pick-up truck and a dump truck. The collision occurred approximately .1 mile south of State Road 870 in Broward County. Both vehicles ended up submerged in a canal located adjacent to the roadway. With the assistance of several passersby, Trooper Austin and Trooper Lopez-Torres entered the water to free the dump truck driver from the vehicle and rescued him. CPR was successfully administered to the victim prior to the arrival of emergency services personnel. The driver was subsequently transported to an area hospital in critical condition.

It is clearly evident that Trooper Austin and Trooper Lopez-Torres placed themselves in great personal danger to save the life of a victim who found himself in great peril. Had they not quickly acted, the consequences would have certainly been grave.

Their heroic actions were in the highest tradition of the Florida Highway Patrol.

Governor recognizes troopers of the year

Published on Thursday, August 17, 2006
in the Tallahassee Democrat

The Florida Highway Patrol has named Troopers Carlos R. Austin and Jorge L. Lopez-Torres as co-recipients of the 2006 Trooper of the Year award.

Austin and Lopez-Torres will be recognized by Gov. Jeb Bush and Cabinet members during today’s Florida Cabinet meeting. The Florida Petroleum Council has sponsored the Trooper of the Year Award since 1965. The award is presented annually in recognition of heroism or exceptional performance.

Austin and Lopez-Torres were selected based on the following incident: On May 10, 2005, about 10 a.m., the troopers responded to a head-on crash that occurred on the Sawgrass Expressway in Broward County involving a pickup and a dump truck.

Both vehicles ended up submerged in a canal. With the assistance of passersby, Austin and Lopez-Torres entered the water to free the dump truck driver from the vehicle and rescued him. CPR was successfully administered before the arrival of emergency services personnel.

Plantation pair picked as Troopers of the Year

Published on Wednesday, August 16, 2006
in the Miami Herald

Two Florida Highway Patrol troopers from Broward County have been selected as the 2006 Troopers of the Year.

Troopers Carlos R. Austin and Jorge L. Lopez-Torres received the award for their work after a fatal crash on the Sawgrass Expressway last year.

Both men are assigned to Troop K in Plantation, which covers the Sawgrass and Florida’s Turnpike.

The troopers were honored on Tuesday with a presentation before Gov. Jeb Bush and the Florida Cabinet, FHP Lt. Roger Reyes said.

They were selected as Troopers of the Year from monthly winners from around the state, Delahoz said.

”They’re good guys, family guys and they do their job,” Reyes said.

The crash happened around 10 a.m. on May 10 when a light Isuzu truck and a dump truck collided on the highway, FHP Sgt. Jorge Delahoz said.

The Isuzu was going south when a tire blew out, and the driver lost control, swerving into the northbound lane into the dump truck.

Both vehicles flew off the road and into a canal, Delahoz said. Both were completely submerged, he said.

Austin and Lopez-Torres, with the help of several bystanders, jumped in and pulled out the dump-truck driver, Delahoz said.

They performed CPR until emergency personnel arrived and transported the driver to the hospital. They couldn’t save the Isuzu driver, who drowned, Delahoz said.

”They put themselves at risk when they jumped into the water,” Delahoz said. “They could easily have drowned themselves.”

Published on Wednesday, August 16, 2006
in the Ft. Lauderdale Sun-Sentinel

Two Plantation members of the Florida Highway Patrol were recognized jointly Tuesday as 2006 Trooper of the Year.

Troopers Carlos R. Austin and Jorge L. Lopez-Torres earned the accolade for heroism or exceptional performance because of an incident that took place on May 10, 2005, according to the highway patrol. On that date, they responded to a morning accident on the Sawgrass Expressway, just south of State Road 870 in Broward County.

When Austin arrived, he saw the top right side of a dump truck sticking out of the water of a nearby canal. The truck had been in a head-on collision with a pickup that dragged both vehicles into the canal.

“In four years, I’ve seen some bad crashes, but it’s the worst crash that I’ve ever seen,” said Austin.

The pickup was underneath the water, below the dump truck, and at first, Austin said he didn’t realize there was a second vehicle involved in the accident. Passersby who had witnessed the crash told him about the other car.

Lopez-Torres was two miles away when Austin paged for backup.

“When I got there, I took off my gun belt and dove into the water,” Lopez-Torres said.

The troopers pulled the dump-truck driver, who was unconscious, out of the truck and, with the help of a nurse who happened to be passing by, administered CPR. They said they also attempted to reach the driver of the pickup, but could not dive deep enough.

Fire rescue arrived five minutes later; the dump-truck driver survived but the pickup driver did not.

On Tuesday, Gov. Jeb Bush officially recognized Austin and Lopez-Torres during a Cabinet meeting. The Florida Petroleum Council has sponsored Trooper of the Year since 1965.

“I was humbled and kind of shocked to get the award because troopers do life-saving duties on a daily basis,” Austin said. “It was something that neither of us expected.”

Published on Wednesday, August 16, 2006
in the Tallahassee Democrat

A laboratory analyst whose work saves taxpayers money on criminal investigations and two Florida Highway Patrol troopers who rescued an injured trucker from a canal were among law-enforcement employees honored Tuesday by Gov. Jeb Bush and the Cabinet.

A Florida Department of Law Enforcement agent who specializes in white-collar crime was named “special agent of the year” and a top administrator from FDLE’s Tallahassee headquarters received the annual “commissioner’s award” for saving her agency money on major purchases and contracts.

Crime-lab analyst Dan Richardson was recognized as “forensic scientist of the year” for a series of major contributions and extra effort in FDLE’s Tallahassee Regional Operations Center. He developed methods for identifying marijuana usage in blood samples and modified the processing of urine samples, saving time on laboratory analyses in criminal cases.

Richardson is working on a new screening instrument that Attorney General Charlie Crist said may save $10,000 a year in toxicology analysis costs.

FDLE said Richardson also helps screen new employees and train forensic technologists, while maintaining a laboratory workload that exceeds his job description. Toxicology analysts are expected to process 110 items per month, but Richardson has averaged 191 items per month for the past 10 months.

He praised FDLE for giving analysts the necessary tools.

“There’s been a solid commitment to providing the necessary resources to get the things done we need to get done,” Richardson told Bush and the Cabinet.

Linda Martindale, an FDLE operations and management consultant in Tallahassee, got the commissioner’s award for coordinating statewide meetings and handling personnel needs of the agency’s professionalism program. She also coordinates performance-based budgeting data.

“Thanks to her analysis of procedures and subsequent recommendations, FDLE has saved significant amounts on contracts and purchases,” Crist said. “She tracks and analyzes annual figures in order to develop financial forecasts, to make sure FDLE’s performance-based budgeting is working at peak efficiency.”

Special agent Claudia Mulvey was named FDLE “agent of the year” for her work with the economic-crimes unit in Miami. She was praised for her work in a complex $2 million interstate case of embezzlement by managers of an aviation company and cracking a major identity-theft case involving credit-card manufacturing equipment, fake numbers and more than $28,000 in cash.

“I am honored to be a member of one of the best law-enforcement agencies in the state of Florida,” Mulvey said.

Picking up on her reference to “one of the best,” Bush playfully asked Mulvey where she worked before joining FDLE, and Mulvey said she had been an FHP trooper. Several troopers, who had come to the Cabinet meeting for the Trooper of the Year award, had stayed at the meeting to applaud Mulvey when she got FDLE’s top honor.

Troopers Jorge Lopez-Torres and Carlos Austin shared the Trooper of the Year award, sponsored by the Florida Petroleum Council. They were cited for jumping into a Broward County canal and rescuing a dump-truck driver from his submerged vehicle after a head-on collision on the Sawgrass Expressway.