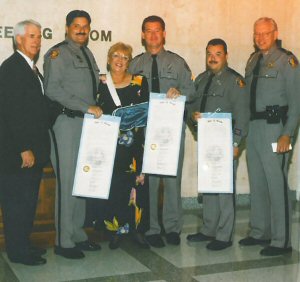 On July 14, 1998, the Florida Highway Patrol announced that Sergeant Michael W. Roden, Trooper Orlando J. Saavedra, and Trooper Andrew R. Smith had been selected for the prestigious Trooper of the Year Award for 1998, based on their combined actions involving the rescue of a female carjacking victim in Dade County.

The three FHP veteran officers were officially recognized as FHP Troopers of the Year by the Governor and Cabinet during the July 14, 1998, Florida Cabinet Meeting. Later that same day, the three officers were honored again during a reception held at the Florida Highway Patrol Training Academy in Tallahassee.

The Florida Petroleum Council has sponsored the Trooper of the Year Award since 1965. The award is presented annually to an outstanding trooper in recognition of acts of heroism or exceptional performance of duties. Mr. Doug Shelby, Florida Petroleum Council Executive Director, said “We are especially proud this year to honor these three outstanding officers who risked their lives to save the life of an extraordinarily brave hostage victim”. This is the first time in the history of the Trooper of the Year award that three officers have been selected. A brief description of the incident is as follows:

On July 8, 1997, at approximately 3:00 p.m., Sergeant Roden was notified by Troop F and the Collier County Sheriff’s Office that two subjects had fired shots at a Florida Highway Patrol trooper on Interstate 75 in the area of Bonita Springs, Florida. The two subjects then took a female hostage and fled in her green BMW, bearing Florida tag EDYSWTY. Troops L and F established roadblocks within their respective areas and Troop E was planning the establishment of a roadblock on US 41 at the Collier County line. 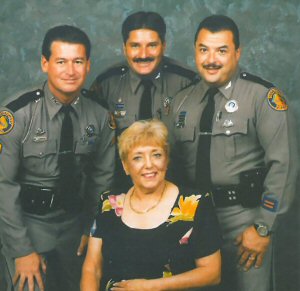 Sergeant Roden was dispatched to help establish the roadblock at U.S. 41 and the Collier County line. At approximately 3:25 p.m., Roden was proceeding to the roadblock location when he observed the BMW traveling eastbound toward Miami. Sergeant Roden immediately turned around and proceeded to overtake the BMW. Troopers Saavedra and Smith were positioned at the intersection of U.S. 41 and Krome Avenue when the vehicle approached and stopped for a red traffic signal. Sergeant Roden instructed the troopers to conduct a felony stop on the vehicle. As the stop was initiated, the subjects fired shots at the troopers. The troopers returned fire as the subjects fled northbound on Krome Avenue.

After a brief chase, the BMW slowed and was struck by two patrol cars. There, after a short struggle, one of the offenders was shot and killed. The other was arrested after a violent hand-to-hand fight. The hostage, was rescued unharmed. Fortunately, Sergeant Roden, Trooper Saavedra, and Trooper Smith all came out of the ordeal with no major injuries.

The suspects were later identified as Billy A. George and David D. George, both of whom were wanted in connection with a bank robbery and kidnapping that occurred in South Carolina. In addition to these crimes, the suspects were also wanted for questioning in the death of their grandparents. The hostage was identified as Ms. Edith E. Silver of Fort Myers.

Sergeant Roden and Troopers Saavedra and Smith demonstrated exemplary courage and determination which resulted in the safe rescue of a hostage from the hands of two armed and dangerous suspects who were wanted by the Federal Bureau of Investigations.