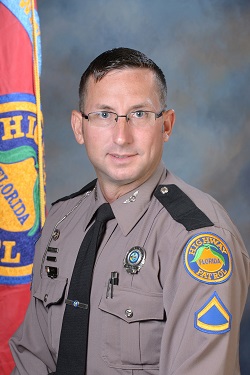 On January 3, 2021, Cox received a BOLO on a vehicle occupied by two passengers who were reportedly armed and suspected of robbing two victims at gun point, taking their cell phone, and abducting their five-month-old child. The cell phone was pinged allowing law enforcement to locate the suspects in the parking lot of a shopping plaza. Cox arrived at the location and observed the suspect vehicle. Driving an unmarked vehicle, Cox was able to approach and observe the suspects before pulling behind the vehicle and initiating a felony traffic stop. Cox apprehended the suspects and safely retrieved the child without further incident or harm. During Cox’s investigation, the handgun used in the robbery and the victims’ cell phone were also recovered.

Cox is to be commended for his actions. Cox’s awareness and quick response ended a dangerous situation. Cox is a true asset to the Florida Highway Patrol, and he exemplifies what it is to be a Florida State Trooper.