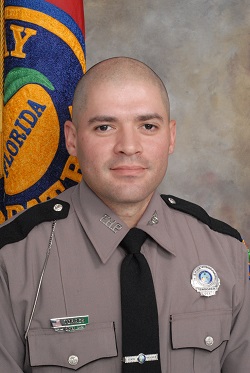 On February 3, 2016, Corporal Julio Torres was on duty in Lee County and was traveling Southbound on I-75 near mile marker 145 when he witnessed a multi-vehicle crash in which one of the vehicles traveled through a guardrail, overturned, and entered a retention pond located in the median. As Corporal Torres stopped at the scene, he was advised by the passenger of the overturned vehicle that the driver was trapped in side and under water. Corporal Torres, without regard for his own personal safety, entered the water along with the passenger and went into the submerged vehicle through a broken window in an effort to free the trapped driver. After cutting the seatbelt, they were still unable to remove the driver due to the damage to the vehicle. Corporal Torres retrieved a crow bar to assist with the extrication. Corporal Torres reentered the water despite alligators now lurking nearby in the pond. With the help of the passenger, Corporal Torres freed the now unconscious driver. The driver was carried out of the water and immediately given CPR until EMS arrived. The driver was transported to Lee Memorial Hospital where he passed away 36 hours later.