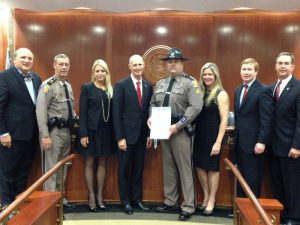 In a ceremony at the Florida State Capitol Building on December 9, 2014, Governor Rick Scott and the Florida Cabinet named Sergeant Andrew Litzell as the Florida Highway Patrol’s 2014 Trooper of the Year.

Sergeant Litzell was selected for this prestigious award following an incident that occurred on December 28, 2013. During the incident, then Trooper Litzell was conducting stationary speed enforcement on US 17 just outside of Palatka. Following an attempt to stop a vehicle for a speeding violation, the driver of the vehicle refused to stop and began taking evasive driving actions as it traveled into a densely populated area. Trooper Litzell pursued the vehicle until it entered into neighborhoods thus making it unsafe for the general public causing Trooper Litzell to disengage from the pursuit and to radio for assistance.

Trooper Litzell, remaining attentive, later spotted the vehicle attempting to avoid detection by driving without its headlights and reengaged the pursuit. The driver and passenger then fled on foot and Trooper Litzell gave chase. As Trooper Litzell began closing in, the driver then turned around and shot Trooper Litzell in the face with a .25 caliber handgun.

Despite the severity of his facial wound, Trooper Litzell was able to neutralize the threat and secure the suspect’s weapon while trying to maintain consciousness until additional officers arrived on the scene.

Trooper Litzell was transported via helicopter to Shands Hospital in Gainesville and made a full recovery.

The Trooper of the Year award was created in 1965 by the Florida Petroleum Council to recognize Florida Highway Patrol Troopers for the work they do each day keeping Floridians and visitors safe on our roads.

The FHP Advisory Council provided a Glock handgun to Sergeant Litzell with the engraving of “2014 Trooper of the Year” which was presented at the FHP Training Academy.

Congratulations to Sergeant Litzell on this extraordinary achievement and for his service and dedication to the State of Florida.