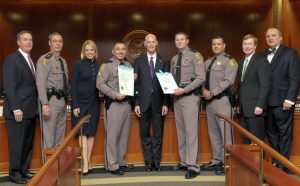 Trooper of the Year  Awarded to Two of Florida’s Finest

Feola and Ivey were selected from more than 100 deserving nominees for their heroic efforts in saving the life of a motorist who was trapped in a burning vehicle last year. The 2013 recognition was presented by Commissioner Putnam on Nov. 19, 2013.

On January 14, 2012, Feola and Ivey responded to a traffic crash that occurred on the Florida Turnpike in St. Lucie County. When they arrived at the scene, they found a driver trapped inside a vehicle that was on fire. As the vehicle was filling up with smoke, Feola was able to break out out a window of the vehicle and Ivey proceeded to enter the smoke-filled car and cut the seat belt, freeing the driver. Both Troopers then pulled the driver from the burning vehicle and to a safe location. Within seconds of dragging the driver out of the vehicle, the vehicle became fully engulfed. Without their quick response and decisive actions, there could have been grave consequences.

The Trooper of the Year award was created in 1965 by the Florida Petroleum Council to recognize Florida Highway Patrol Troopers for the work they do each day keeping Floridians and visitors safe on our roads.

The FHP Advisory Council provided a Glock weapon to both Feola and Ivey with the engraving of “2013 Trooper of the Year”, which was presented at the FHP Training Academy.