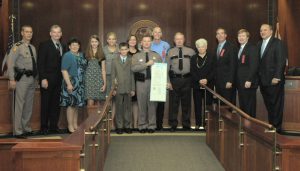 Florida’s Governor and Cabinet Recognize Trooper of the Year

The Florida Cabinet honored Corporal Cale Stevens when they named him the Florida Highway Patrol’s 2011 Trooper of the Year.  Stevens is assigned to FHP’s Troop F in Venice and has been with the Patrol for 12 years. His quick actions saved a man’s life.

“Corporal Stevens’ heroic actions clearly demonstrate his commitment to public safety,” said Pam Bondi, Florida Attorney General. “We are extremely proud to honor him as the 2011 Trooper of the Year.”

On July 22, 2010, at 12:45 p.m., Stevens was off duty getting a haircut when he heard a crash.  He went to investigate the origin of the sound and discovered that a traffic crash had occurred outside the business.  As he approached a vehicle with front-end damage, he asked an onlooker to call 911 to report the crash.  Stevens observed an unresponsive driver slumped over in the driver’s seat.  He assessed the driver’s injuries and could not locate a pulse, so he enlisted the assistance of a bystander, who helped him remove the driver from the vehicle onto the pavement where he could perform CPR.  The subject began breathing, and Stevens was able to detect a slight pulse.  Stevens continued to assess the driver’s condition until emergency services arrived. Had it not been for Stevens’ quick response, the driver may not have survived the crash.

The Florida Petroleum Council developed the Trooper of the Year award program more than 40 years ago to recognize troopers who go above and beyond the call of duty.

Congratulations to Corporal Stevens on this extraordinary achievement and for his service and dedication to the State of Florida.