Trooper Edward Pope has not only earned the prestigious Florida Highway Patrol Trooper of the Year Award for 2007, but is recognized for having earned the distinction of being the only trooper in the history of the Florida Highway Patrol to be awarded Trooper of the Month an unprecedented three times in a single year for three separate acts of bravery and excellent police work. 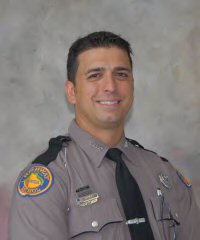 January 17, 2006 Trooper Pope was operating stationary radar on Midway Boulevard in Charlotte County when a citizen informed him that there was a stolen black pickup truck with an Ohio license plate parked on the shoulder of Eagle Street in Port Charlotte. Trooper Pope located the suspect vehicle, and conducted a check on the tag and VIN. The vehicle had been stolen out of Fairfield County, Ohio.

In a separate incident, which occurred on Saturday, January 21, 2006, Trooper Pope received a BOLO for a black BMW traveling from Tampa to Charlotte County via I-75. This vehicle was alleged to be carrying a large quantity of cocaine. The BOLO supplied a name of a white male that was supposed to be traveling in the BMW. Trooper Pope ran the subject’s name using D.A.V.I.D. and obtained an address in Charlotte County. Trooper Pope traveled to the address to investigate the BOLO. Upon his arrival, he observed the black BMW in the driveway. Deputies from the Charlotte County Sheriff’s Office were at the address investigating a burglary at the residence. Trooper Pope informed the deputies of the BOLO and the possibility that the BMW had a large amount of cocaine in it. The Sheriff’s Office had their K-9 unit respond to attempt a track on the burglary suspect. While on the premises, the K-9 alerted to the BMW. The owner of the BMW would not give Trooper Pope his consent to search the vehicle, so Trooper Pope obtained and executed a search warrant for the vehicle. While conducting the vehicle search, Trooper Pope located approximately half a pound of marijuana. He arrested the owner of the vehicle for felony possession of marijuana and seized the vehicle.

May 22, 2006 Trooper Pope received a BOLO regarding a woman who had contacted the Fort Myers Regional Communication Center to report that her husband was going to kill himself. The husband was driving a 2005 Dodge pick-up truck on I-75 possibly between North Port and Sarasota with an unknown direction of travel. While Trooper Pope was searching the northbound portion of the Interstate, he received information that the woman was at Exit 179, so he responded to that location and met with the woman. She stated that she and her husband were going through a difficult divorce, and that five minutes earlier she had spoken with her husband who told her that he could not take it any more and was going to kill himself, and then he hung up the phone. The woman attempted to call her husband back several times, but he did not answer the phone. Trooper Pope also attempted to reach the man on his cell phone, but only got a voice message.

When Trooper Pope asked if her husband had any close friends, the woman was able to give him the name and cell phone number of the friend. Trooper Pope contacted the friend who was very upset because he had just been on the phone with the husband who told him he was going to kill himself. The husband told his friend that he had a bottle of vodka and a bottle of Vicodin that he was going to take. The friend stated he could hear the husband handling what appeared to be a full bottle of pills and he appeared to be drinking something. The friend stated that the husband would not tell him where he was. After the friend gave Trooper Pope his home address, Trooper Pope requested the Communication Center to dispatch a Charlotte County deputy to that location to look for the husband in case he arrived there.

Trooper Pope again attempted to call the husband’s cell phone. A Charlotte County deputy answered the phone. The deputy stated that he had found the subject intoxicated and was going to take him to a hotel to sleep it off. Trooper Pope asked the deputy to immediately contact EMS because the subject was believed to have taken a large quantity of pain medication with the alcohol. Trooper Pope and the woman headed to the location where the deputy found the husband and found EMS on the scene. The subject, who appeared to be semi-conscious, was transported to the local hospital. The Charlotte County Sheriff’s Office assumed the investigation. Trooper Pope later contacted the hospital and was informed the husband would recover, but was lucky to have been found so quickly or he may not have survived. Trooper Pope was contacted by the towing company for the vehicle in regards to two letters that were located in the visor of the vehicle. One of the letters was a suicide letter addressed “To Whom Finds Me.” Trooper Pope took possession of these letters and turned them over to the Charlotte County Sheriff’s Office.

July 27, 2006 Trooper Pope was dispatched to a crash on southbound I-75 in Charlotte County and advised that a vehicle was sinking in the water with an unconscious driver still inside. When he arrived on the scene, he found several vehicles parked along the west shoulder of southbound I-75 with several bystanders pointing toward the water. Trooper Pope exited his vehicle and quickly ran to the scene where he saw a white van partially submerged in the water approximately seventy feet from the roadway. He saw two men, one trying to get out of the passenger side window and the other clinging to the roof of the sinking vehicle.

Trooper Pope removed his gun belt and ran into the water, which was above his head in certain areas. He reached for the male passenger trying to exit the vehicle and brought him to an area of the water where he could stand and return to shore. The passenger told Trooper Pope that his father could not swim, so Trooper Pope returned to the sinking vehicle to retrieve the elderly driver who was clinging to the roof. The man would not let go of the roof. Trooper Pope tried to communicate with the man who could not speak English. The gentleman appeared to be concerned about his belongings on the roof of the vehicle, so Trooper Pope grabbed the items and tossed them to the passenger who was standing nearby in the water. Trooper Pope grabbed the elderly man, held him in his left arm, and swam to an area where he could stand. He continued to hold the elderly man in his arms and brought him back to shore.

After the two men were safely on the shore, several bystanders pointed at two alligators swimming toward the van, which was only displaying a small portion of the front left corner of the roof and the driver side portion of the windshield. When Trooper Pope discovered that the two men had no one to pick them up from the scene, he transported them to their place of employment in Fort Myers.

Trooper Pope is to be commended for his hard work, relentless efforts, excellent investigative skills, and for his performance above and beyond the call of duty. Trooper Pope acted in the highest tradition of the Florida Highway Patrol, and is commended for his actions. We congratulate him on being selected as the Florida Highway Patrol 2007 Trooper of the Year!