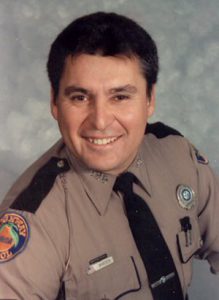 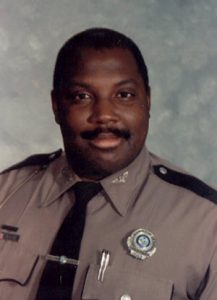 Officer Stephen Lee, a Bonifay police officer, had just responded to a call at a residence where the situation suddenly turned violent. Officer Lee was shot by a subject at the residence, and called for assistance. Hearing of this, Corporal Warden immediately left the police department and quickly responded to the scene, and notified Trooper Brown via radio. Trooper Brown was close by and immediately responded as well.

Corporal Warden arrived first on the scene to find Officer Lee shot and on the ground. The suspect was standing in his yard with an assault rifle aimed in Warden’s direction. Corporal Warden placed his patrol car in between the suspect and Lee in order to protect the fallen officer. Warden then fired at the suspect to protect them both. Trooper Brown also arrived on the scene and parked his patrol car in a strategic location not far from Warden. Brown then exited his vehicle with his shotgun and began working his way towards the front of the suspect’s house via a ditch on the opposite side of the street. By then, the suspect had retreated inside his house and was firing at both troopers repeatedly with the assault rifle. Corporal Warden and Trooper Brown both returned fire as needed during the course of the entire event.

After an extensive exchange of gunfire, which ultimately included deputies from the Holmes and Washington County Sheriff’s Departments, things subsided and the suspect disappeared from view. A tactical team subsequently discharged tear gas into the house and entered the dwelling after no response. The suspect who shot Officer Lee was found unconscious and incapacitated on the floor, and subsequently died of bullet wounds suffered during the exchange of gun fire with law enforcement.

After being up all night long investigating a traffic fatality, and after enduring this traumatic event and the subsequent questioning and debriefing, Corporal Warden and Trooper Brown were not through for the day. They both insisted on traveling to a Dothan, Alabama, hospital to check on their fallen comrade. Only after being able to see Officer Lee and briefly speak with him after surgery did they agree to call it a day.

It is clearly evident that Corporal Warden and Trooper Brown placed themselves in great personal danger to save the life of a fellow officer. Had they not quickly responded, strategically placed their cars and returned fire, the consequences would have certainly been grave. Their heroic actions were in the highest tradition of the Florida Highway Patrol.