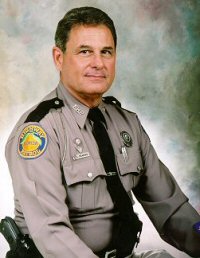 Trooper Michael W. Dearing has been selected as the Florida Highway Patrol Trooper of the Year for 2001 for his lifesaving actions that he performed on an infant. 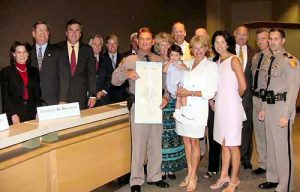 Colonel Chris Knight, Director of the Florida Highway Patrol, announced today that Trooper Michael W. Dearing has been selected as the 2001 “Trooper of the Year” for his lifesaving actions that he performed on an infant.

Dearing will be officially recognized as FHP Trooper of the Year by Governor Jeb Bush and Cabinet members during today’s Florida Cabinet Meeting. The Florida Petroleum Council has sponsored the Trooper of the Year Award since 1965. The award is presented annually to an outstanding trooper in recognition of acts of heroism or exceptional performance of duties. Trooper Dearing was selected for this prestigious award based on the following incident:

On August 26, 2000, while off-duty, Trooper Dearing was on a fishing trip with his family at Steinhatchee, Florida. At approximately 9:30 a.m., Trooper Dearing was walking to the dock with his brother-in-law, Al Morris, to board a fishing boat. A hysteric woman nearby began hollering and asking if anyone knew CPR. Dearing immediately indicated that he did and she approached him, putting the baby in his arms.

The child was not breathing and was turning blue due to lack of oxygen. Trooper Dearing quickly performed the Heimlich maneuver by thrusting two fingers to the abdomen area in order to dislodge anything that was blocking the airway. 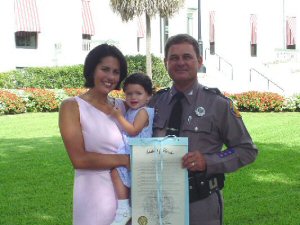 His efforts were successful and the child began breathing again. Trooper Dearing returned the child to a grateful grandmother, Connie Foley, who thanked him for his efforts.

Trooper Dearing’s decisiveness and quick response undoubtedly were instrumental in saving the life of this small child.

Trooper Dearing is a 30-year veteran of the Florida Highway Patrol assigned to Troop G, Jacksonville.