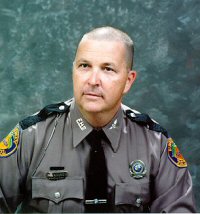 On Saturday, January 9, 1999, at approximately 1:20 PM, Florida Highway Patrol Trooper Mark W. Nevergold was on routine patrol in Palm Beach County when he observed a red 1995 Isuzu with a female driver, teen-age female passenger, and male toddler passenger. None of these individuals were restrained by required safety belts and, in the case of the toddler, a child safety seat. Trooper Nevergold initiated a routine traffic stop for non-use of a child safety seat (as permitted by Florida Statute 316.613); approached the vehicle; noted the occupants and the presence of an unused child safety seat in the vehicle; requested the driver return to his patrol vehicle with her driver’s license, vehicle registration, and insurance papers; discussed the legal requirements and citation options with the driver; and made the decision to issue just one traffic citation to the driver strictly for the observed secondary violation of her not wearing a safety belt.

While writing up this traffic citation Trooper Nevergold noticed the young passenger frequently putting both his hands to the vicinity of his mouth. Just as Trooper Nevergold completed the citation and handed it to the driver, Melissa Hutcherson, the teen-age passenger jumped from the stopped car and ran back to the patrol car screaming that the young toddler was not breathing and was turning blue.

Trooper Nevergold immediately ran to the stopped automobile. Remembering that the youngster had earlier placed both hands to its mouth, Trooper Nevergold suspected the child had ingested some foreign object into its throat and, therefore, immediately began performing the Heimlich Maneuver in an effort to remove this object and to permit resumption of normal breathing. Trooper Nevergold’s diagnosis was correct. A coin was shortly expelled from the child’s throat, and the child began to breathe normally. An inspection of the child’s hands revealed several coins, similar to the one expelled from the throat, still tightly clutched after all the excitement.

After assuring that the child was breathing normally for a period of time, Trooper Nevergold assisted Ms. Hutcherson in properly installing the child safety seat in the vehicle, and made sure that all three were properly buckled up and secured. He then released the vehicle, and resumed his normal patrol duties.

Trooper Nevergold is an eighteen-year veteran of the Florida Highway Patrol. He resides in Jupiter and has been assigned to Troop L, Lantana for his entire career. He and his wife, Maria, have two sons; Garrett (age 10) and Ross (age 7).