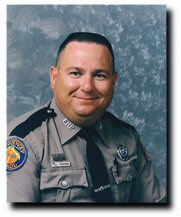 On June 25, 1996, the Florida Highway Patrol announced that Trooper Johnny A. Freeman had been selected for the prestigious Trooper of the Year Award for 1996. Trooper Freeman is stationed in Pensacola.

Trooper Freeman was officially recognized as FHP Trooper of the Year by the Governor and Cabinet during a June 25, 1996, Florida Cabinet Meeting. Later that day, Trooper Freeman was honored again during a luncheon sponsored by the Florida Petroleum Council at the Radisson Hotel in Tallahassee. The Florida Petroleum Council has sponsored the Trooper of the Year Award since 1965. The award is presented annually to an outstanding trooper in recognition of acts of heroism or exceptional performance of duties.

Trooper Freeman was recognized for rescuing two teenage boys from drowning in the Gulf of Mexico on June 25, 1995. Trooper Freeman received information on his scanner that Escambia Rescue and the Escambia County Sheriff’s Department were being dispatched to an emergency call to rescue swimmers in distress in the Gulf of Mexico off Johnson Beach Road. Trooper Freeman, who was accompanied on patrol by FHP Auxiliary Lieutenant Harold Blum, was on Johnson Beach Road and near the location of the emergency. Realizing that there had been several incidents of swimmers drowning in this area as a result of undertow and/or rip currents recently, Trooper Freeman immediately responded to the emergency call and arrived before the other emergency assistance. 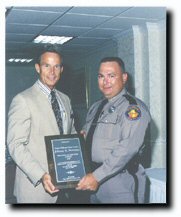 Upon his arrival at the scene of the emergency, Trooper Freeman observed two (2) teenage boys crying for help and obviously in distress, approximately one hundred (100) yards from shore, in the Gulf of Mexico. After a brief assessment of the situation by Trooper Freeman, and after removing their shirts, shoes, and gunbelts, Trooper Freeman and Lieutenant Blum plunged into the uncertain Gulf waters, risking their own lives in order to rescue the two youths.

While neither Trooper Freeman nor Lieutenant Blum have been trained for water rescue or lifeguard duties, their courage and quick actions, without regard for their own personal safety, saved the lives of these two young men.

In addition to saving the lives of the two teenagers on June 25, 1995, Trooper Freeman was also selected as Trooper of the Year for his consistent and continued enforcement of DUI and safety belt laws in the Pensacola area. He is 30-years old and joined the FHP in 1989.

FHPA Lieutenant Blum was selected as the FHP Auxiliary Trooper of the Year for his actions.