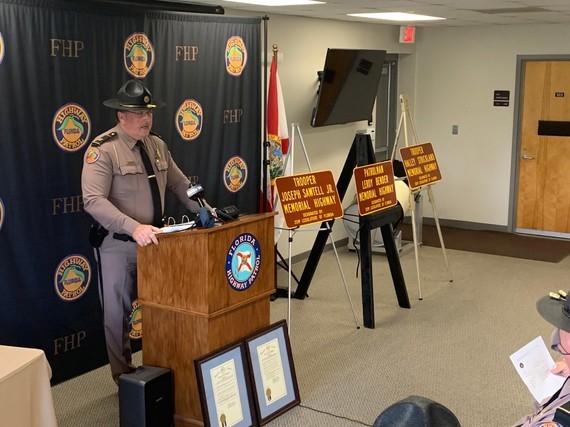 Patrolman Leroy C. Bender served the residents of Florida from February 1944, until his death on October 25, 1947. Patrolman Bender was investigating a traffic crash in Sanford when a passing car struck and killed him. Patrolman Bender was 44 years old at the time of his death. West First Street in Seminole County, between French Avenue and South Mellonville Avenue, was dedicated in remembrance of Patrolman Bender.

Trooper Halley C. Strickland served the residents of Florida for seven years. His career began in August 1946, as part of the 6th Recruit Class in Kissimmee. On January 8, 1954, Trooper Strickland was killed while pursuing a fleeing violator when his patrol car struck a tree as he turned to avoid another vehicle. Trooper Strickland was 33 years old at the time of his death. U.S. 1 in Brevard County, between East Main Street and Parrish Road, was dedicated in remembrance of Trooper Strickland.

Trooper Joseph N. Sawtell, Jr. served the residents of Florida for four months. He began his career in May 1966, as part of the 29th Recruit Class in Tallahassee. On August 5, 1966, Trooper Sawtell, Jr. was killed when a car ran a stop sign and struck his patrol car. He was 23 years old at the time of his death. Babcock Street in Brevard County, between Malabar Road and Palm Bay Road, was dedicated to Trooper Sawtell, Jr.

“The brave men and women of the Florida Highway Patrol put themselves in harm’s way on a daily basis to keep our roadways and those who travel them safe. I was proud to sponsor legislation honoring our fallen troopers who made the ultimate sacrifice in the line of duty,” said Senator Lauren Book. “With these designations, our first responders will know that their sacrifice and heroism will never be forgotten by Floridians.”

Representative Chuck Brannan said, “It was my privilege to sponsor this legislation so that we can permanently honor those troopers who have given their lives in defense of all we hold dear. It is my hope that the motoring public will always remember their sacrifices as they pass by these markers on our state highways.”

The ceremony was held today at the FHP office in Cocoa. FHP members and leadership, along with local officials, gathered to pay tribute and unveil the three roadway signs honoring Patrolman Bender, Trooper Strickland, and Trooper Sawtell, Jr.