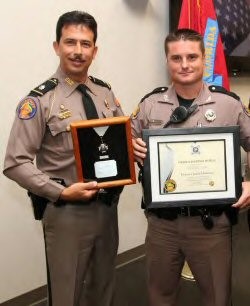 On March 23, 2012, Trooper Jason Ekstrom responded to a crash scene to assist Trooper Thomas Ketterle with a driving under the influence investigation. Before the troopers could conduct the investigation, the suspect fled on foot in an attempt to elude them. The suspect ran across the southbound lanes of Interstate-95. Ekstrom deployed his TASER and struck the suspect, but it had no effect on the suspect. Ketterle then deployed his TASER to the suspect’s back, with no effect. Both troopers chased the fleeing suspect down the interstate. Ketterle attempted to trip the suspect to get him off balance. Ketterle tore his leg muscle during the incident and fell in the roadway.

Ekstrom tackled the suspect taking him to the ground along the shoulder of the road and handcuffed him. Ekstrom then saw Ketterle injured in the road unable to move. He went back into the lanes of traffic and pulled Ketterle to the shoulder out of harm’s way. Had Ekstrom not pulled Ketterle from the roadway, Ketterle would have been hit by approaching traffic.

Ekstrom acted with bravery and heroism in his duties to rescue an injured co-worker and fellow brother in law enforcement. Ekstrom exemplifies the spirit of the Florida Highway Patrol by protecting Ketterle without thought of his own personal safety.

Ekstrom arrested the suspect and charged him with DUI, possession of a controlled substance, and resisting arrest with violence.