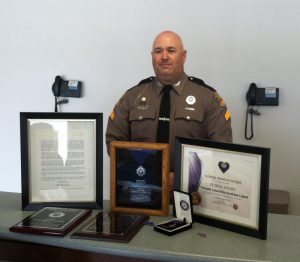 On December 28, 2013, Trooper Lawrence Andrew Litzell attempted to affect a traffic stop on a red Mercury Grand Marquis traveling southbound on US 17. The driver of the vehicle refused to stop. The suspect vehicle turned around and proceeded through a nearby neighborhood before emerging back onto US 17. The vehicle headed north on US 17 into the city of Palatka, and then proceeded over the Memorial Bridge. When the vehicle turned right onto 2nd Street into another neighborhood, Trooper Litzell disengaged the pursuit and notified the Jacksonville Regional Communications Center that the vehicle continued to travel away from him. 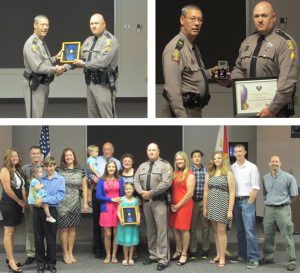 Trooper Litzell then assisted with securing the subject and handgun immediately after the incident. Due to the unknown location of the second subject, Trooper Litzell maintained a defensive position until additional officers arrived on scene.

Trooper Litzell was transported to University of Florida Health Hospital of Gainesville by medical helicopter where he underwent surgery to repair the damage caused by the bullet.

Trooper Litzell made a full recovery and has since been promoted to Sergeant. He was named FHP’s Trooper of the Month in December 2013 for his heroic actions of that night. Since the incident, Sgt. Litzell has received FHP’s Medal of Valor and the Purple Heart.