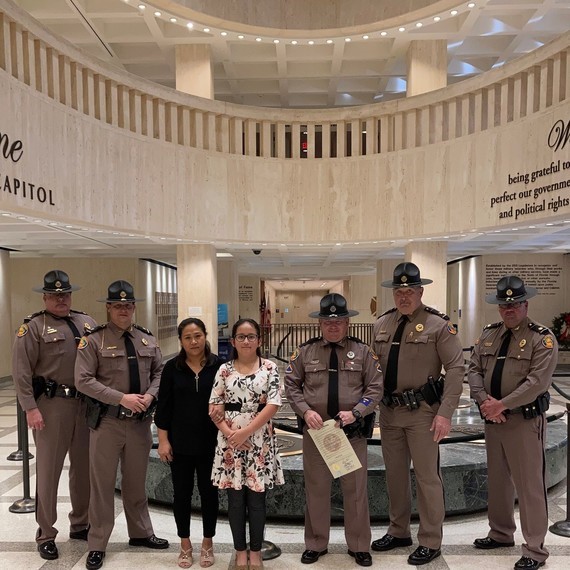 [Trooper Curtis Vaughn, center right, with family and FHP leadership after being recognized by the Governor and Cabinet as the Trooper of the Year]

“Trooper Vaughn displayed outstanding gallantry in the apprehension of a suspect committing a criminal act. I am honored to serve with dedicated and courageous troopers like Trooper Vaughn, who selflessly put their lives on the line every day to protect the residents of our great state,” said Colonel Gene Spaulding, Director of the Florida Highway Patrol. “FHP is grateful to Governor DeSantis and the Florida Cabinet for sponsoring this special recognition.”

“The bravery demonstrated by Trooper Vaughn is commendable and exemplifies the core values of the Florida Highway Patrol – courtesy, service, and protection,” said Florida Department of Highway Safety and Motor Vehicle (FLHSMV) Executive Director Terry L. Rhodes. “I thank Governor DeSantis and members of the Florida Cabinet for providing this well-deserved recognition to Trooper Vaughn and for their continuous support of our troopers who faithfully serve the citizens and visitors of Florida each day.”

On April 28, 2019, Trooper Vaughn responded to a request by the Citrus County Sheriff’s Office regarding an active pursuit where the suspect had attempted to run over multiple Citrus County deputies. Trooper Vaughn and two other troopers intercepted the pursuit in the area of U.S. Route 41 and East Sunray Lane in Citrus County, where Trooper Vaughn assumed the primary position. The GPS tracking devices deployed by Trooper Vaughn on to the driver’s vehicle failed to operate effectively, requiring Trooper Vaughn to use pursuit intervention techniques. It became evident to Trooper Vaughn and the two additional troopers that the driver was familiar with FHP pursuit tactics and the suspect’s vehicle, an F250 truck, was much heavier than the patrol units being operated by the FHP members making pursuit intervention techniques more difficult and dangerous to perform. During the pursuit, the suspect fired at least three rounds of ammunition through the rear window of his vehicle at the troopers, with one round striking and shattering the front windshield of an assisting trooper. Trooper Vaughn was fearless in his pursuit despite the gunshots aimed at the troopers, and successfully stopped the vehicle resulting in the apprehension of the suspect.

The Trooper of the Year award was created in 1965 by the Florida Petroleum Council to recognize Florida Highway Patrol Troopers for the work they do each day to ensure A Safer Florida.

The Florida Department of Highway Safety and Motor Vehicles (FLHSMV) provides highway safety and security through excellence in service, education and enforcement. FL is leading the way to A Safer Florida through the efficient and professional execution of its core mission: the issuance of driver licenses, vehicle tags and titles and operation of the Florida Highway Patrol. To learn more about FLHSMV and the services offered, visit https://www.flhsmv.gov, follow us on Twitter @FLHSMV, find us on Facebook or follow us on Instagram.