A portion of U.S. 1 in Miami-Dade County was named in remembrance of FHP Trooper Luther P. Daniel 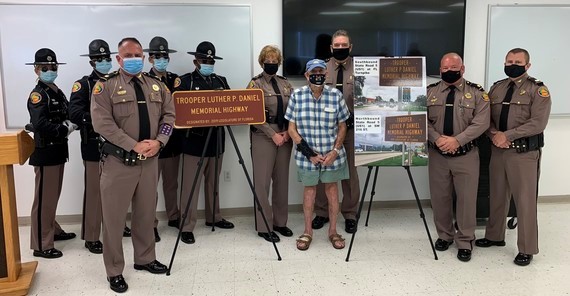 Marathon, Fla. – Yesterday, a portion of U.S. Highway 1 in Miami-Dade County was named in remembrance of fallen Florida Highway Patrol (FHP) Trooper Luther P. Daniel. Trooper Daniel was the first Florida trooper to die in the line of duty.

On December 5, 1941, Trooper Daniel was shot during a traffic stop by an escapee in a stolen vehicle just north of Homestead. Trooper Daniel usually drove a motorcycle, but he was driving another officer’s vehicle that night, which was taken by the suspect and wrecked not far away from where the shooting occurred.

Trooper Daniel served the residents and visitors of Florida with FHP for six months. His career with FHP began July 1, 1941, as part of the 3rd Recruit Class in Lakeland, from July 1 to August 1, 1941. Upon graduating from the academy, he was stationed in Miami. At the time of his death, he was 32 years old. He was survived by his wife Florence and son Bill.

“The first Florida Trooper to die in the line of duty, Trooper Daniel was a hero among us – willing to run toward danger to help keep others safe,” said Senator Lauren Book. “It is my honor to have worked with FHP and the Florida Legislature to ensure the proper recognition of Trooper Daniel and the legacy of service he has left behind.”

Representative Chuck Brannan said, “It was my honor to sponsor this legislation so that we can permanently honor those troopers who have given their lives in defense of all we hold dear.”

“Paying honor to Trooper Daniel by naming a portion of U.S. 1 in his honor is a great tribute,” said Colonel Gene S. Spaulding, Director of the Florida Highway Patrol. “I would like to thank the Florida Legislature and Governor Ron DeSantis for ensuring the sacrifices of our fallen heroes are memorialized.”

The roadway sign dedication ceremony was held yesterday at the FHP station in Marathon, Florida. Trooper Daniel’s son, Bill, who was just nine years old at the time of his father’s passing – now 88 – was in attendance at the ceremony. FHP members and leadership, along with local officials gathered to pay tribute and unveil the roadway sign in Trooper Daniel’s honor.