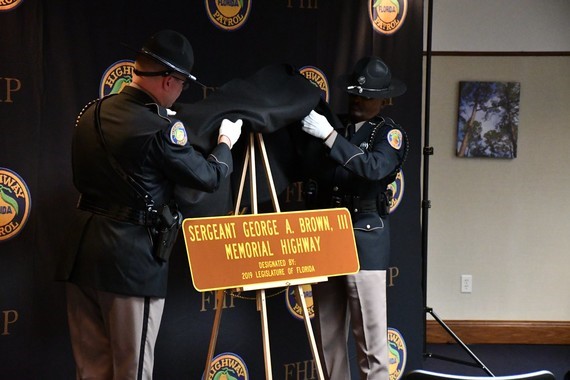 ~ A portion of Interstate 75 in Columbia County was named in remembrance of FHP Sergeant George A. Brown III ~

Lake City, Fla. – Today, a portion of Interstate 75 between mile markers 418 and 423 in Columbia County was named in remembrance of fallen Florida Highway Patrol (FHP) Sergeant George A. Brown III.

Sergeant Brown was a member of FHP, serving the citizens and visitors of Florida for 33 years. Prior to starting his career with FHP, Sergeant Brown served in the U.S. Marine Corps in Vietnam. He was a graduate of the 37th FHP Basic Recruit Class, effective September 26, 1970, and served in various parts of the state during his distinguished and tenured career.

On April 27, 2004, while pursuing a fleeing vehicle on Sisters Welcome Road, approximately six miles south of Lake City, he was involved in a traffic crash where he sustained fatal injuries.

“With 33 years of service to Florida with the Florida Highway Patrol, Sergeant Brown was a hero among us – willing to run toward danger help keep others safe,” said Senator Lauren Book. “It is my honor to have worked with FHP and the Florida Legislature to ensure the proper recognition of Sergeant Brown and the legacy of service he has left behind.”

Representative Chuck Brannan said, “It is my hope that as the motoring public passes these markers that we all remember it is not how these officers died that made them heroes, it is how they lived. Time should never diminish respect. May we never forget those who gave their lives in defense of ours and all that we hold dear!”

“Paying tribute to Sergeant Brown by naming a portion of Interstate 75 in his honor is a great tribute,” said Colonel Gene S. Spaulding, Director of the Florida Highway Patrol. “Sergeant Brown was dedicated to serving the residents and visitors of this state as a Florida Highway Patrol Trooper, and the ultimate sacrifice he paid is well deserving of this recognition.”

The roadway dedication ceremony was held today at the Florida Department of Transportation facility in Lake City, Florida. Loved ones, FHP members and leadership, and local and state officials gathered to pay tribute and unveil the roadway sign in his honor.