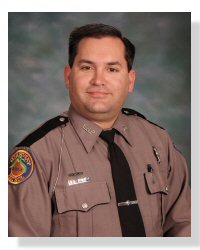 Trooper Bill Dyer was in an single vehicle crash on Interstate 10 in Leon County while on duty. He suffered from a medical emergency which caused the crash on Oct. 18, 2011. He died on December 28, 2011.

In 1994, Dyer joined the FHP Auxiliary. Two years later, he attended the training academy to become a Florida State Trooper and served Florida’s residents and visitors for an additional 16 years.

During today’s ceremony, FHP Director Col. David Brierton said he was honored to be in the presence of Dyer’s family, fellow troopers and recruits. “As we add Trooper Dyer’s photograph to our memorial wall, let us all remember to pay our respects to the service and sacrifices he made, along with the other 42 members memorialized on the wall. Continue to serve with pride and integrity, and honor the memory of these men and women,” he added.

On May 13, Brierton will travel with Dyer’s family to the National Law Enforcement Officer Memorial in Washington, D.C., where Dyer will join fellow officers memorialized. Dedicated in 1991, the memorial honors federal, state and local law enforcement officers who made the ultimate sacrifice for the safety and protection of our nation and its people.