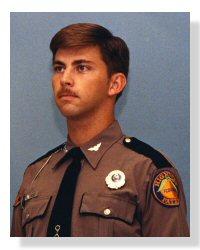 Trooper Rouse was in an automobile accident in Broward County. He was responding to a fatal accident call on Alligator Alley, when a van made a U-turn in front of him.

Trooper Rouse had served the residents of Florida, with the Florida Highway Patrol, for 11 months. His career with FHP began May 5, 1986. He was in the 76th recruit class in Tallahassee, from May 5 to August 22, 1986.  He was stationed in Fort Lauderdale.  At the time of his death, he was 23. He was survived by his wife, parents and sister.