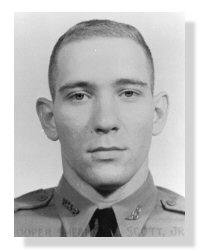 Trooper Scott was shot during a routine traffic stop in Jacksonville. The driver was an escaped convict.

Trooper Scott had served the residents of Florida, with the Florida Highway Patrol, for 3 years. His career with FHP began November 1, 1961. He was in the 22nd recruit class in Tallahassee, from August 30 to November 17, 1962.  He was stationed in Frostproof and MacClenny.  At the time of his death, he was 25.