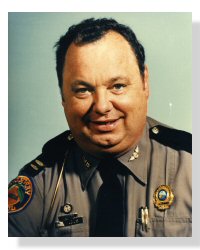 Captain Jones was shot accidentally while cleaning his service weapon in Tallahassee.

Captain Jones had served the residents of Florida, with the Florida Highway Patrol, for 24 years. His career with FHP began July 7, 1969. He was in the 36th recruit class in Tallahassee, from September 1 to November 22, 1969.  He was stationed in Fort Lauderdale, Naples, Lake City, Marianna, Quincy, Panama City, Madison and Tallahassee.  At the time of his death, he was 47.