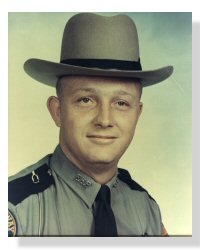 Trooper Smith was shot while checking out two men in a parked car off US 19 in Inglis.  They attempted to flee but two deer hunters, who had witnessed the shooting, wounded one of them and then captured both.

Trooper Smith had served the residents of Florida, with the Florida Highway Patrol, for 8 months. His career with FHP began May 1, 1973. He was in the 43rd recruit class in Tallahassee, from June 25 to September 14, 1973.  He was stationed in Homosassa.  At the time of his death, he was 28. He was survived by his wife, Susan, and daughter, Alicia.