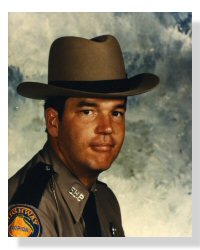 Trooper McDermon was shot while attempting to apprehend an escaped prisoner off US 90 near Jacksonville. McDermon was off duty and was with his cousin when they returned to the cousin’s home, encountered the prisoner who was armed.  Shots were exchanged and both the trooper and his cousin were killed. The suspect was apprehended a short time later.

Trooper McDermon had served the residents of Florida, with the Florida Highway Patrol, for 11 years. His career with FHP began June 1, 1970. He was in the 39th recruit class in Tallahassee, from July 5 to September 25, 1971.  He was stationed in Miami, Ocala and Jacksonville.  At the time of his death, he was 35. He was survived by his wife and two children.