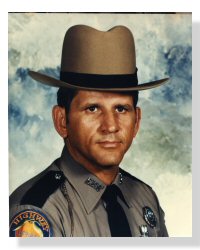 Trooper Pruitt was in an airplane crash in St. John’s County while assisting in the search for two suspects wanted for breaking and entering. Corporal Cleo Tomlinson and Trooper Merle Cook were also lost in this crash.

Trooper Pruitt had served the residents of Florida, with the Florida Highway Patrol, for 5 years. His career with FHP began April 16, 1976. He was in the 51st recruit class in Tallahassee, from June 7 to September 3, 1976.  He was stationed in Pinellas Park and Fernandina Beach.  At the time of his death, he was 37. He was survived by his wife, Valera, and two daughters, Angela and Tammy.