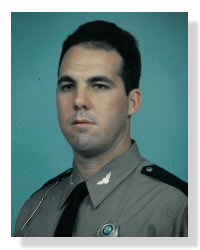 Trooper Smith was sitting in his patrol car in the emergency lane of Interstate 95 in Miami after completing a traffic stop and was struck from behind by a drunk driver traveling at an excessive speed.

Trooper Smith had served the residents of Florida, with the Florida Highway Patrol, for 4 years. His career with FHP began January 4, 1993. He was in the 87th recruit class in Tallahassee, from January 4 to May 21, 1993.  He was stationed in Naples and Miami.  At the time of his death, he was 34. He was survived by his wife, young son and daughter.