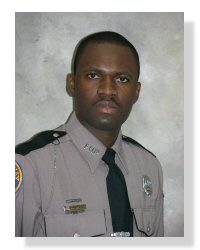 Trooper Ambroise was killed when his patrol car was struck from behind while he was stopped on the shoulder of the Florida Turnpike, near Okeechobee Road. A vehicle traveling on the turnpike suddenly veered onto the shoulder and struck Trooper Ambroise’s patrol vehicle, causing it to burst into flames, and trapping him inside.

Trooper Ambroise had served with the residents of Florida, with the Florida Highway Patrol, for four years. His career with the FHP began June 20, 2005. He was a member of the 111th Recruit Class in Tallahassee, from June 20, 2005 to January 12, 2006. He was assigned to Troop K (Miami-Turnpike). At the time of his death, he was 35. He is survived by his wife, Roberta and two young daughters, mother and five siblings.

We are saddened to hear of the tragic death while in the line of duty of Trooper Patrick Ambroise of the Florida Highway Patrol. In memory of Trooper Ambroise, the Governor authorizes the flying of the State flag at half-staff over the Miami-Dade County Courthouse and the City Hall of Miami-Dade, Florida. In addition, the Governor also authorizes the flying of the State flag at all Florida Highway Patrol stations and the Department of Highway Safety &Motor Vehicles on the date of Trooper Ambroise’s funeral, Sunday, May 23, 2010, from sunrise to sunset.

“My heart goes out to Trooper Ambroise’s wife and two young daughters, as well as to the Florida Troopers who worked alongside him. Trooper Ambroise stood for service to his community, dedication to his fellow officers, and commitment to his family.

“The family and friends of Trooper Ambroise, a Haitian-American concerned about loved ones still recovering from the recent earthquake, will remain in the thoughts and prayers of all who knew him.

“Every day Florida’s law enforcement officers put themselves in harm’s way as they serve on the frontlines protecting our neighborhoods and communities. We join together to mourn this loss and celebrate a brave man’s life as a brother, a son, a father and a husband.”

The U.S. Honor Flag, since 2001, has traveled all over this nation to honor America’s finest. The Flag arrived from Washington, D.C. earlier this week to pay tribute to Trooper Ambroise.

The Honor Network, the organization that oversees the U.S. Honor Flag, has made arrangements for the Miami Tower to be illuminated in various colors to honor fallen Heroes. Tonight will be the tower’s inaugural illumination in blue, signifying the honor of Police and specifically honoring Trooper Ambroise this week, who lost his life in the line of duty on May 15, 2010

“Showing the nation that the community in Miami is united is a tremendous privilege for us. Honoring Trooper Ambroise with such a tribute is fitting. The Miami Tower will become a national showcase of how important the men and women who server our cities, and our nation are, whether in Miami or Sacremento, since we are united in this cause. We are excited to open a new door and chapter in Honoring our Heroes” said Chris Heisler President & CEO of The HonorNetwork.”

The Miami-Dade Police Department (Dade County Sheriff’s Office) is proud to announce that the Miami Tower , formerly known as the CenTrust Tower , will shine in the color of blue to honor Trooper Ambroise. It will remain blue throughout next week in a show of support for law enforcement.

The Miami-Dade Police Department supports The Honor Network, a non-profit organization that is the custodian of the United States Honor Flag and honor heroes who made the ultimate sacrifice. MDPD is also home for the United State Honor Flag while it’s at rest.

Checks or money orders should be made payable to The Patrick Ambroise Memorial Fund and sent to:

Alternatively, anyone can go into any Regions Bank branch and ask to make a deposit to The Patrick Ambroise Memorial Fund.