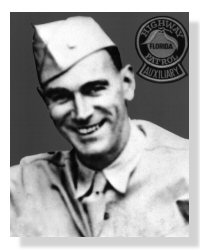 Captain Bender was struck by a vehicle as he manned a roadblock, on the 36th Street Causeway, to restrict traffic because of dangerous driving conditions in Miami Beach due to Hurricane Betsy.

Captain Bender had served the residents of Florida, with the Florida Highway Patrol Auxiliary, for 6 years. He began his career with FHPA in 1959 and was stationed in Miami. At the time of his death, he was 34. He was survived by his wife, Martha, three brothers and a sister.