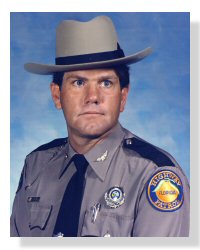 Trooper Hendrix was on routine patrol duty in Pensacola when his patrol car was in an accident with a log truck.

Trooper Hendrix had served the citizens of Florida, with the Florida Highway Patrol, for 9 years. He was in the 59th recruit class in Tallahassee, from March 17 to June 13, 1980.  At the time of his death, he was 37.