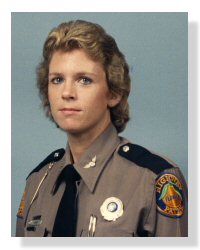 Trooper Hurd was conducting a traffic stop on South I-95 in Ft. Lauderdale, when she was struck by a passing van. The driver was intoxicated and fled the scene, but was later apprehended and convicted.

Trooper Hurd had served the residents of Florida, with the Florida Highway Patrol, for 6 years. Her career with FHP began May 5, 1986. She was in the 76th recruit class in Tallahassee, from May 5 to August 27, 1986.  She was stationed in Fort Lauderdale.  At the time of her death, she was 26. She was survived by her husband Timothy.