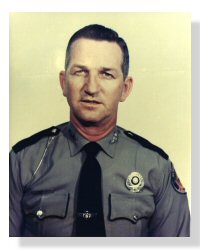 Trooper Flynt was shot when opening his door to a neighbor, who had run to his home for help when being victimized by an armed gunman intent on stealing her car.

Trooper Flynt had served the residents of Florida, with the Florida Highway Patrol, for 19 years. His career with FHP began October 15, 1956. He was in the 15th recruit class in Tallahassee, from October 15 to December 7, 1956.  He was stationed in Tampa.  At the time of his death, he was 52. He was survived by his wife Lillian and two daughters, Barbara and Karen.