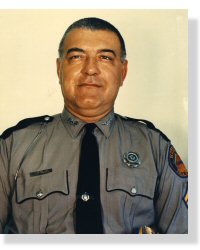 Corporal Bertrand was shot by a traffic violator he suspected was under the influence, on State Road 80 in Ft. Myers.

Corporal Bertrand had served the residents of Florida, with the Florida Highway Patrol, for 16 years. His career with FHP began August 26, 1951. He was in the 8th recruit class at Eglin AFB, from August 26 to October 4, 1951.  He was stationed in Pahokee, Homestead, Miami, Pinellas Park and Fort Myers.  At the time of his death, he was 46. He was survived by his wife, Pauline.