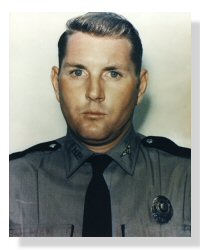 Trooper Sawtell was on patrol in Melbourne when his cruiser was struck by a car that ran a stop sign.

Trooper Sawtell had served the residents of Florida, with the Florida Highway Patrol, for 4 months. His career with FHP began May 2, 1966.  He was in the 29th recruit class in Tallahassee, from May 2 to July 23, 1966. He was stationed in Melbourne.  At the time of his death, he was 23. He was survived by his parents, Joseph, Sr. and Margaret.