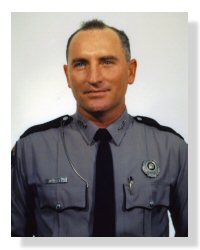 Trooper Hagerty was piloting a traffic plane over Lakeland when he was struck by a low-flying U.S. Navy jet.

Trooper Hagerty had served the residents of Florida, with the Florida Highway Patrol, for 13 years. His career with FHP began October 15, 1956. He was in the 15th recruit class in Tallahassee, from October 15 to December 7, 1956.  He was stationed in Frostproof, Punta Gorda, Stuart and Orlando.  At the time of his death, he was 44.