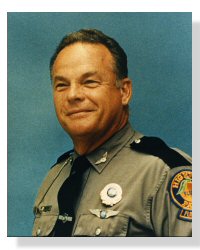 Sergeant Baxter was in an airplane crash in Manatee County while assisting in the search for a suspect in four armed robberies.

Sergeant Baxter had served the residents of Florida, with the Florida Highway Patrol, for 25 years. His career with FHP began August 1, 1960. He was in the 20th recruit class in Tallahassee, from January 19 to April 8, 1961.  He was stationed in Brooksville, Fort Lauderdale, Sarasota and Bradenton.  At the time of his death, he was 57.