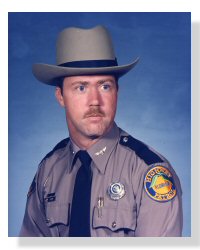 Trooper Young, a member of the narcotics squad, was shot while attempting to arrest a drug courier during a traffic stop in Manatee.

Trooper Young had served the residents of Florida, with the Florida Highway Patrol, for 3 years. His career with FHP began February 1, 1984. He was in the 70th recruit class in Tallahassee, from February 4 to April 27, 1984.  He was stationed in Miami and Bradenton.  At the time of his death, he was 28. He was survived by his wife, Karen, and daughter, Christina.