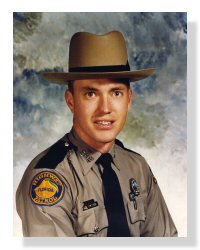 Trooper Fulford was searching a vehicle in Monticello, when a bomb detonated inside a microwave.

Trooper Fulford had served the residents of Florida, with the Florida Highway Patrol, for 14 years. His career with FHP began August 8, 1977. He was in the 53rd recruit class in Tallahassee, from August 8 to November 4, 1977.  He was stationed in Bradenton and Monticello.  At the time of his death, he was 35. He was survived by his wife, Keith Ann and two children.