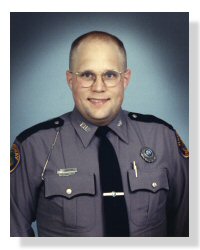 Trooper Crooks was shot during the attempted apprehension of a subject in Pasco County who had just shot and killed two Tampa Police Department detectives.

Trooper Crooks had served the residents of Florida, with the Florida Highway Patrol, for 9 months. His career with FHP began January 7, 1997. He was in the 91st recruit class in Tallahassee, from January 7 to June 20, 1997. At the time of his death, he was 23. He was survived by his parents, Michael and Vivian.