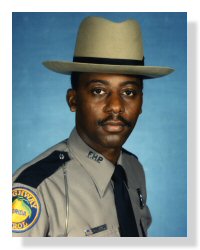 Trooper Jennings was struck by a passing vehicle while assisting with a traffic crash on the Sawgrass Expressway in Sunrise.  He was outside of his car directing the cleanup of the previous crash. His patrol car, with lights flashing, was shielding the workers clearing the debris. Two cars waiting to pass, were clipped from behind by another vehicle causing it to skid, flip and pin Jennings causing fatal injuries.

Trooper Jennings had served the residents of Florida, with the Florida Highway Patrol, for 11 years. His career with the FHP began January 7, 1985. He was a member of the 72nd Recruit Class in Tallahassee, from January 7, 1985 to April 5, 1985. At the time of his death, he was 33.  He was survived by his wife Cheryl, who was eight months pregnant with their first child.