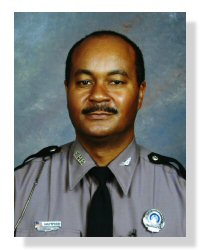 Trooper Haywood died in the line of duty as a result of a traffic crash on Saturday, October 2, 2004, while attempting to overtake a speeding motorcycle on Interstate 4 in Volusia County.

Trooper Haywood had served the residents of Florida, with the Florida Highway Patrol, for four years. His career with the FHP began March 27, 2000, after retiring from the New York City Police Department after 20 years of service. He was a member of the 98th Recruit Class in Tallahassee, from March 27, 2000 to September 21, 2000. He was stationed in Volusia County. At the time of his death, he was 50. He is survived by his wife, Linda, two children, and one grandchild.