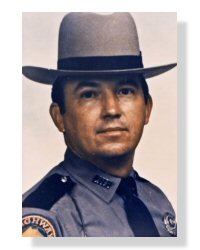 Trooper Baker was shot after stopping an escaped prisoner in a stolen car, on US 41 in Sarasota.

Trooper Baker had served the residents of Florida, with the Florida Highway Patrol, for 9 years. His career with FHP began January 6, 1964. He was in the 24th recruit class in Tallahassee, from January 6 to March 28, 1964.  He was stationed in Key West and Venice.  At the time of his death, he was 32. He was survived by his wife, Connie and daughter, Sabrina.