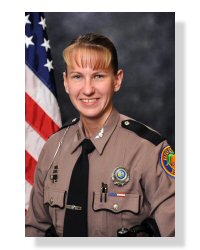 Trooper Richard had served the residents of Florida, with the Florida Highway Patrol, for nine years. Her career with the FHP began June 20, 2005. She was a member of the 111th Recruit Class in Tallahassee, from June 20, 2005 to January 12, 2006. She was assigned to Troop B-Ocala. At the time of her death, she was 30. She was survived by her 4-year-old son, Clayton, parents and grandparents.

I am deeply saddened by the loss of Florida Highway Patrol Trooper Chelsea Richard. Trooper Richard lost her life on Saturday, May 3, 2014, when she was fatally injured while responding to the scene of a crash. In honor of Trooper Richard, I hereby direct the flags of the United States and the State of Florida to be flown at half-staff at the City Hall in Ocala, Florida, the County Courthouse of Marion County, Florida, law enforcement and first responder facilities in Marion County, Florida, and at all Florida Highway Patrol facilities throughout the State of Florida, from sunrise to sunset on Thursday, May 8, 2014.

Ocala, Fla. – The Florida Highway Patrol is preparing for the funeral of Trooper Chelsea Richard who was killed in the line of duty on Saturday, May 3, 2014. The funeral is being held on Thursday, May 8, 2014 at the First Baptist Church of Ocala. Certain roadways will be impacted during the funeral procession and traffic may become congested.

Traffic will be delayed for a brief time between N.E. 8th Avenue and Baseline Road on S.R. 40, then south on N.E. 25th Avenue to Maricamp Road. Traffic in and around the First Baptist Church of Ocala will also be impacted. Motorists are urged to seek alternate routes between 12:30 p.m. and 5:00 p.m. If traveling in the area during this time frame motorists need to be aware of slowing and stopped traffic and pedestrians.