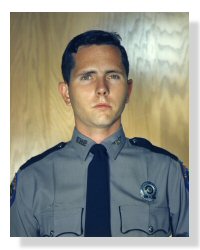 Trooper Parks was shot during the apprehension of two armed robbery suspects on Interstate 95 in Jacksonville.

Trooper Parks had served the residents of Florida, with the Florida Highway Patrol, for 6 years. His career with FHP began November 16, 1967. He was in the 35th recruit class in Tallahassee, from January 6 to March 29, 1969.  He was stationed in Yulee.  At the time of his death, he was 28. He was survived by his wife, Carolyn, and two daughters (the second born after his death).