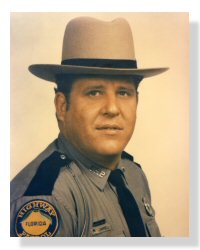 Trooper Campbell was shot after being kidnapped during a routine traffic stop in Perry. He was found in Georgia with another kidnapped victim.  The suspect, an escaped fugitive, was later apprehended and while trying to gain control of an officer’s weapon during the arrest, was shot and killed by an FBI agent.

Trooper Campbell had served the residents of Florida, with the Florida Highway Patrol, for 9 years. His career with FHP began October 1, 1965. He was in the 30th recruit class in Tallahassee, from August 29 to November 19, 1966.  He was stationed in Venice and Perry.  At the time of his death, he was 35.