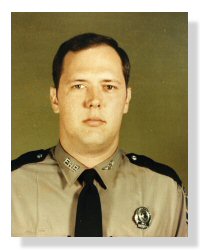 Trooper Glascock was shot during a traffic stop at a toll booth on State Road 836 in Miami.  The events that followed, included a massive manhunt for the driver and roadblocks set up all over Miami. The suspect turned himself in when he couldn’t leave town. This case motivated the State Cabinet to buy bullet-resistant vests for all State Troopers.

Trooper Glascock had served the residents of Florida, with the Florida Highway Patrol, for 1 year. His career with FHP began June 6, 1976. He was in the 51st recruit class in Tallahassee, from June 7 to September 3, 1976.  He was stationed in Miami.  At the time of his death, he was 24. He was survived by his father, William.