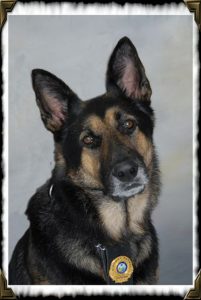 Ozzy born in 2002, was assigned to Trooper Richard Elliot in 2004. They attended K9 school in Gainesville for eight months. Ozzy was on the road in Troop H for approximately three and a half years and was responsible for the seizure of approximately 75 pounds of marijuana, five kilos of cocaine, $200,000 in U.S. currency and $148,000 in counterfeit travelers checks. Ozzy had tracked several fleeing felons and apprehended three suspects.

Ozzy was retired in 2007 due to a genetic back problem. He became a member of the Elliot family home where he lived with 5 cats (all were good buddies) and the last year and a half included a Belgium Malinous, Jackel. Jackel came into the family as a 12 week old puppy and kept Ozzy very busy. Ozzy was slowing down and had a hard time being able to function due to the back and hip issues. Ozzy passed away on December 22, 2012, due to health problems and is now in a wonderful, pain free place where he can run and enjoy. He will be truly missed until the time that we meet again. Rest in peace my partner, pal and pet.