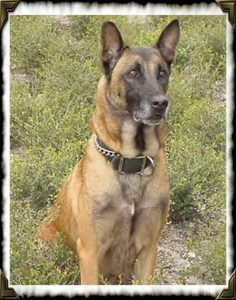 Duke, a Belgian Malanios, entered the Criminal Interdiction Unit on November 2, 1998. He has helped seize drugs valued at $4,011,607; $9,952,128 in US Currency and one firearm seized/found while being used in the commission of a felony. During his time with CIP he was used in 29 area searches and helped with six captures/arrests.

Retired K-9 Duke passed away on Friday January 8th, 2010. Duke was fourteen years old and had lived well past the normal age for a Belgian Malinois. He was a spectacular work dog and served the State of Florida with dignity and honor. He will be greatly missed by his FHP family.