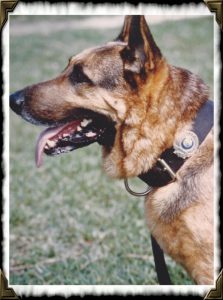 K-9 Chivas began his career with the Florida Highway Patrol as one of the first K-9s assigned to Troop E and his handler was Trooper Pat Murphy. When Trooper Murphy was promoted and reassigned, Trooper Chris Veverka went through training at the City of Miami K-9 Training Academy with Chivas. They graduated the class in May of 1986.

Chivas stayed with Veverka until his retirement, due to hip dysplasia, in 1991.