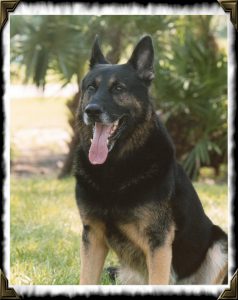 K-9 Bishop began his service with the FHP in 1995, where he served his fellow troopers and particularly his handler, Sergeant Dan Hinton, until he retired April 2003. During his career, he is credited with countless drug seizures, including one case when he alerted to 2500 pounds of marijuana and 328 kilos of cocaine.

K-9 Bishop died on August 5, 2005 and will always be missed by those who knew him and remembered for his duty and service to the citizens of the State of Florida.